Bing Center publications are made available as a courtesy to our patients & caregivers. Articles are listed by year of publication. The number of articles for each year is shown as (Article Count: x). Clicking the year, and then clicking on the desired article will display the corresponding PDF file from the publication. The Adobe Acrobat viewer is required, and can be obtained (free) from http://www.adobe.com/reader. 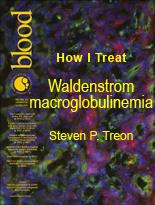 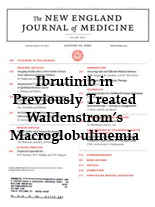 BACKGROUND: MYD88L265P and CXCR4WHIM mutations are highly prevalent in Waldenström’s macroglobulinemia. MYD88L265P triggers tumor-cell growth through Bruton’s tyrosine kinase, a target of ibrutinib. CXCR4WHIM mutations confer in vitro resistance to ibrutinib. METHODS: We performed a prospective study of ibrutinib in 63 symptomatic patients with Waldenström’s macroglobulinemia who had received at least one previous treatment, and we investigated the effect of MYD88 and CXCR4 mutations on outcomes. Ibrutinib at a daily dose of 420 mg was administered orally until disease progression or the development of unacceptable toxic effects. RESULTS: After the patients received ibrutinib, median serum IgM levels decreased from 3520 mg per deciliter to 880 mg per deciliter, median hemoglobin levels increased from 10.5 g per deciliter to 13.8 g per deciliter, and bone marrow involvement decreased from 60% to 25% (P<0.01 for all comparisons). The median time to at least a minor response was 4 weeks. The overall response rate was 90.5%, and the major response rate was 73.0%; these rates were highest among patients with MYD88L265PCXCR4WT (with WT indicating wild-type) (100% overall response rate and 91.2% major response rate), followed by patients with MYD88L265PCXCR4WHIM (85.7% and 61.9%, respectively) and patients with MYD88WTCXCR4WT (71.4% and 28.6%). The estimated 2-year progression-free and overall survival rates among all patients were 69.1% and 95.2%, respectively. Treatment-related toxic effects of grade 2 or higher included neutropenia (in 22% of the patients) and thrombocytopenia (in 14%), which were more common in heavily pretreated patients; postprocedural bleeding (in 3%); epistaxis associated with the use of fish-oil supplements (in 3%); and atrial fibrillation associated with a history of arrhythmia (5%). CONCLUSIONS: Ibrutinib was highly active, associated with durable responses, and safe in pretreated patients with Waldenström’s macroglobulinemia. MYD88 and CXCR4 mutation status affected responses to this drug. (Funded by Pharmacyclics and others; ClinicalTrials.gov number, NCT01614821.) 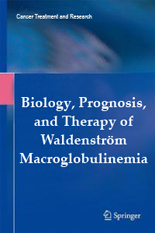 Waldenström Macroglobulinemia (WM) is a rare B-cell lymphoma characterized by the uncontrolled accumulation of malignant lymphoplasmacytic cells, mainly in the bone marrow, and monoclonal IgM production. Despite its rarity, our understanding of the biology of this disease has improved significantly in recent years with the identification of recurrent mutations in the MYD88 and CXCR4 genes. Based on the diversity of clinical features observed in WM patients, therapy should be highly personalized having into account several factors such as age, co-morbidities, IgM levels, and presence of hyperviscosity, coagulopathy, cryoglobulinemia, or cold agglutinin disease. In this chapter, we review the recent advances in the biology of WM and the current therapeutic options for untreated and relapsed WM patients. Finally, we discuss the role of prognostic factors and current evidence supporting an improvement in the survival of WM patients in the last decade. 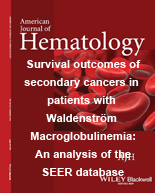 PURPOSE: We hypothesized that survival outcomes of WM patients who develop SM is distinct from the general population of individuals who develop those same malignancies. Using the SEER-18 data (2000-2011), we identified patients with cancers of the breast, prostate, lung, colorectum, bladder, melanoma, non-Hodgkin lymphoma (NHL) and acute leukemia, and compared their outcomes according to having antecedent WM or not. The outcome of interest was overall survival (OS), which was analyzed in proportional-hazard models adjusted for age, sex, race and stage. RESULTS: We found that patients with WM who developed SM were older than population controls with those same cancers. In the multivariate analysis, WM cases with colorectal cancer (HR 1.97; p<0.001), melanoma (HR 2.63; p<0.001) and NHL (HR 1.35; p=0.02) had worse OS than controls with those respective cancers. WM patients with diffuse large B-cell lymphoma also had worse OS (HR 1.86; p=0.008). The utilization of surgery and radiation was similar between WM cases and controls, except lower rates of prostatectomy and melanoma surgery among WM patients. CONCLUSION: The survival of WM patients with colorectal cancer, melanoma and NHL is worse than among general population controls, arguing in favor of age-appropriate cancer screening.

There are no articles in this category. If subcategories display on this page, they may contain articles.