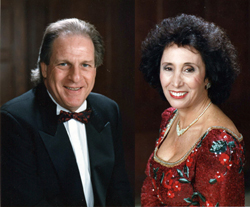 We would like to turn our spotlight to a wonderful couple, Ed & Marian Saltzman, who, through their generous donations, have provided invaluable help to the Bing Center.  Ed Saltzman, born in 1937, attended Hofstra University where he received his BS in Bio Chemistry. He served in the US Army Medical Corps, and then 11 years at Roche Laboratories as Director of Hospital Sales. He then founded Health Learning Systems Inc., United Weight Control, and Women's Health Alliance (sold to ABC TV).  He has served as vice president of the National Kidney Foundation, NYC, and the International Board at Haifa University, Israel.  He and Marian (Abraham) met while attending Hofstra. They were married in 1958 and have been blessed with 3 children and 8 grandchildren.

In January, 2000, Ed was diagnosed with Waldenstrom's Macroglobulinemia at the Cornell Medical Center. At that time, WM was considered an "orphan disease", with little research money available to study this disease.  Few treatment options were available, and there were few doctors with expertise in WM. In April, 2001, Ed was introduced to Dr. Steven Treon, who was heading up a fairly new research group at the Dana-Farber, "The Waldenstrom's Macroglobulinemia (WM) Program". Unlike other WM research efforts, which were typically combined with Multiple Myeloma research, the "WM Program" was 100% dedicated to the research and clinical treatment of WM.  For the next ten years, Ed continued his treatments at the Dana-Farber WM Program (renamed "The Bing Center for WM" in 2005). He is currently working with his local NYC medical team, but keeps in regular touch with the Bing Center.

In 2002, Ed & Marian held a fundraiser at their Hamptons home to raise money for the WM Program. At the end of the event, disappointed with the financial result, Ed took out his checkbook and wrote a personal check to the WM Program.  His contribution was instrumental in funding the initial development of the program's website. The website quickly became an invaluable resource for WM patients and clinicians alike. In 2009, the website was redesigned to its current format.  It has since become a "one-stop-shop" source for the latest published research, clinical trials, and other information for WM. Ed & Marian's generosity has also provided the impetus for other WM-related websites, specifically devoted to our bi-annual WM Workshops, Clinical Trials Group, and Patient/Physician Summit meetings. These websites have helped make WM patients some of the most educated in the world about their disease.  Ed and Marian have been instrumental in funding these efforts, and we would like to say, "Thank you!"

If you wish to contribute to the Bing Center, you may visit the following link.  100% of your contribution goes to the funding of research into Waldenstrom’s Macroglobulinemia, and may be tax-deductable.